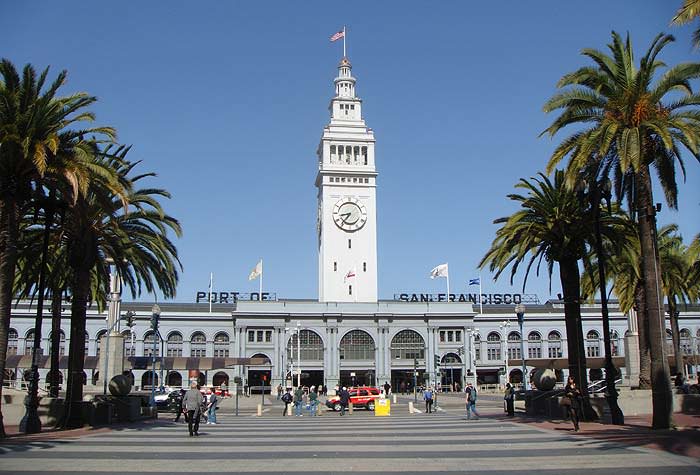 Welcome to the Self Guided Ferry Building Walking Food Tour! We are going to have a blast over the next hour exploring The Ferry Building, which is now a showcase for Bay Area artisan foods and home of San Francisco’s most well known Farmer’s Market. The revitalization of the Ferry Building is deeply tied to the story of rise of The Ferry Plaza Farmer’s Market and I joke the six degrees of Alice Waters.

Our story goes back to 1992 when Sibella Kraus had the idea of putting a farmer’s market on the San Francisco Port. Sibella was a line cook at Alice Waters’ Chez Panisse when she invented the position of forager for herself and started growing lettuces in Alice Waters’ backyard. It was at this time when she started looking for artisanal farmers and producers to supply the restaurant. She realized that the more restaurants she could enlist to buy from her same farmers, the more sense it made for everyone – sort of like the first CSA of collective buying. All of a sudden, if restaurants got together to assure organic and sustainable farmers that there was enough demand and they would buy it, more restaurants would get super fresh, high-quality produce. She called this endeavor the Farm-Restaurant Project. With a regular weekly meeting place—like a farmers market—restaurants and farmers could get to know each other, collaborate on what to grow, and prepare for the arrival of new crops, all of which would enrich the city’s menus and stir public interest.

Sibella called up her friend Patty Untermann who at the time owned Hayes Street Grill and was the restaurant critic for the San Francisco Chronicle. And together with Tom Seargent, they campaigned for the Ferry Plaza Farmer’s Market.

So, in the fall of 1992 finally with the permission of the Port of SF the first Farmer’s Market took place in the parking lot across from the Ferry Building. There were 75 farmers and vendors in attendance and it is estimated that about 10,000 people showed up that day.

When the Ferry Plaza Farmers Market debuted the spring of 1993 for real, it was one of just three farmers markets in San Francisco, a city which now boasts over 25 markets each week.

It was at this time that the Port of SF selected private developers to renovate the dilapidated San Francisco landmark Ferry Building and turn it into a culinary emporium, a shrine to the Bay Area’s burgeoning artisan food movement. The newly re-finished Ferry Building cost $90 Million and reopened in March of 2003 and in April the Farmer’s Market moved back to the Ferry Plaza bringing 30,000 people with them.

Today, over 100 Bay Area chefs shop at the Ferry Plaza Farmers Market to supply their kitchens with fresh, regional food—food that is well-raised, well-selected and, well, delicious!

Chefs widely agree that the market is integral to the chef community in San Francisco since its a place where ideas exchanging ideas and they can return to their menus and restaurant inspired.

It is with these inspirations that we enter the building to experience the Marketplace for ourselves. Frog Hollow Farms, located in Brentwood, has been at the market since day one.

“Farmer Al,” as he likes to be called, grew up in the Bay Area and graduated from UC Berkeley In 1976 he purchased 13 acres in Brentwood and planted peaches because they are his favorite fruit. From the beginning his goal was to grow great-tasting fruit and to market it locally. In 1989 Farmer Al decided to go organic and change the farm name to Frog Hollow Farm. Over the years, Frog Hollow has expanded from its original 13- acre parcel to a thriving 143-acre farm.

The El Cerrito native spent time in Hawaii as a Social Studies teacher before trying his hand at farming. He started growing some basic varieties of fruit and vegetables in Hawaii and then moved back to the Bay Area and eventually set up shop in Brentwood. What started out as 150 fruit trees has now become 3500 trees on over 133 acres.

Frog Hollow Farm is known for their “legendary” stone fruits, as their tagline says, including nine varieties of pears in the fall through January, three varieties of cherries and four kinds of apricots in May, thirteen varieties of peaches, eight kinds of nectarines, and six kinds of plums and pluots through September. To me, this is one of the most unique and specialized shops in San Francisco and the Ferry Building – a shop full of mushrooms. It embodies all of the wonderful qualities of this place.

The Garrone family has been selling at Bay Area farmers’ markets for over fifty years. When they first started out, thewere only selling Button Mushrooms and growing mushrooms in a garage but slowly started growing other mushrooms as well. Now they carry over 42 different types of mushrooms. And Far West Fungi is still one of the original stores in the Ferry Building Marketplace that got their start at the Ferry Plaza Farmers Market. Ian Garrone was nine when his family started Far West Fungi and he’ll tell you that he learned to count at the farmers market.

Often times people ask what to do with mushrooms once they get home. They recommend starting out easy. Just sauté them and use them as a base for a soup, because they can add a great earthy, hearty flavor. Founded by husband and wife team, Michael and Jackie Recchiuti, this is one of San Francisco’s best chocolatiers. Their truffles are decadent and be sure to pick up some of their ‘smores bites and burnt caramel truffles – and truly everything you try is award-worthy and competes with the best French chocolatiers. American truffles have arrived!

In the 10 years since it opened, the Ferry Building has become one of San Francisco’s most visited landmarks, drawing 6 million visitors a year. The traffic has led to brisk sales. On average, retailers have watched revenue grow 9.5 percent annually over the 10-year period. Today retailers doing business there generate revenue of between $1,500 and $4,500 a square foot. Sales at the Ferry Building exceed the revenue per square foot of Whole Foods nationally, which averaged $982 in 2012. That is to say, the Ferry Building Marketplace is now one of the top destinations in San Francisco. I hope that you have enjoyed yourself and continue to learn about this great arena for showcasing Bay Area Foods.