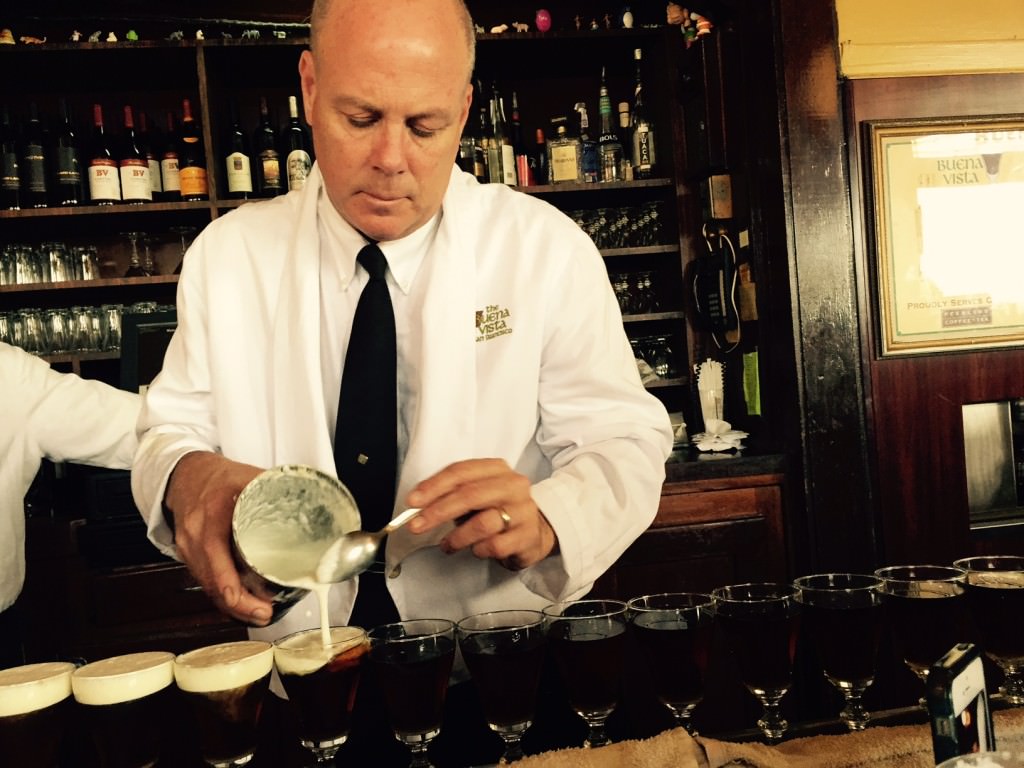 Irish Coffee seems like a pretty simple drink, right? I mean, who can’t add a slug of whiskey to a cup of hot coffee and top it with some cream?

Ah, but San Francisco Irish Coffee’s brilliance lies in its simplicity. Every element needs to be perfect.

At the Buena Vista Café on the corner of Hyde and Beach streets overlooking Fisherman’s Wharf, it’s no secret that they’ve perfected the San Francisco Irish Coffee. It’s such an institution that it doesn’t even need to use the full name: cable car placards say “Meet me at the BV.”

And why not? After all, it’s where the drink first landed in America in 1952. The original Irish Coffee was created by an airport chef named Joe Sheridan, who worked at the little Foynes airport near Limerick, according to the Ireland Whiskey Trail. He whipped it up one rainy winter night for passengers whose plane got turned around due to a storm. He later moved to the Shannon Airport, and took the drink with him. Travel writer Stanton Delaplane tasted it there, and one night Buena Vista Cafe owner Jack Koeppler convinced him they needed to figure out how to make a San Francisco version.

The Buena Vista Cafe uses Tullamore Dew Irish whiskey and Peerless Coffee, a family-owned coffee brand. An immigrant from Yugoslavia founded the Oakland roastery in 1924, and it remains there today. It’s smooth and nutty and substantial, but never bitter.

“We sell more Irish whiskey than anywhere in the world,” says Clark Facer, a 26-year barman at the BV. Watching Facer make Irish Coffees is mesmerizing, as close to a fusion of man and machine as you might see behind a bar. He lines up 10 or so of the fluted glasses the coffees are served in along the rail. Splash, dump, pour, plop, chop goes the hot water, coffee, sugar cubes. Next come jiggers of whiskey and finally frothy whipping cream. While the BV owns Irish Coffee, here are a few more Bay Area hot and spirited drinks to warm the cockles of your heart and other parts on a San Francisco chilly night: – This swank little number is like the little baby dressed as Father Time on New Year’s Eve. The bar is just a few months old, but it’s been carefully styled to evoke an art deco boîte from 1936. A barman in a white coat will mix up your drink, giving it a kick with Powers Irish Whiskey, a venerable brand with an aroma of fruit and cacao. 895 Bush St., San Francisco, 415-771-9695.

Lungomare – You might not know it, but this Jack London Square Italian spot has a rather robust bar program. They make all sorts of tinctures and infusions in-house including their own crème de cacao by macerating cocoa nibs for 40 days. Ask for a hot version of the Caffé Corretto, which is espresso “corrected” or improved with their crème de cacao, vodka and Nocino della Cristina, a walnut liqueur from Napa. 1 Broadway, Oakland, 510-444-7171. a Cafe – The House Cappuccino 1919 is an inside joke that dates back to Prohibition. It’s brown but there’s no coffee in it — it’s code for an adult hot chocolate. The current version starts with incredibly smooth and nutty Dandelion Chocolate ganache and organic milk steamed on the first cappuccino machine in the city spiked with Marie Duffau Bas Armagnac and Buffalo Trace bourbon. Pair your House Cappuccino with a White Nun — an actual coffee drink that tastes like a hot White Russian — you do have two hands. Then enjoy alternating sips of the two. 242 Columbus Ave., San Francisco, 415-986-9651.

Want to join us for a culinary experience this winter? At checkout, use code WINTER for 20% off.