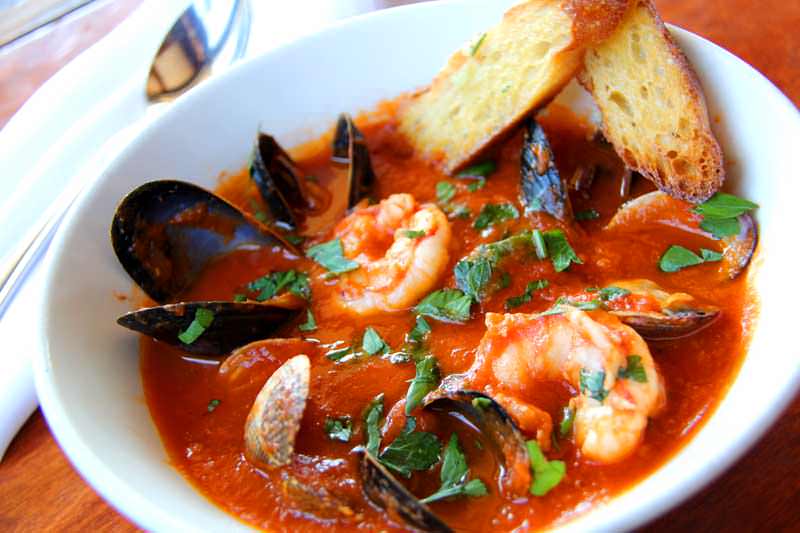 Cioppino is a tomato-based seafood stew that was invented by the San Francisco Italian fishermen of North Beach in the late 1800s using whatever seafood was leftover from the day’s catch. Often times it was crab, shrimp, clams and fish, which were then combined with onions, garlic, and tomatoes and then everything was cooked with herbs in olive oil and wine. Originally it was made on the boats while out at sea and in the Italians homes but as the Italian restaurants started sprouting up around the wharf Cioppino moved into the restaurant and became a very popular dish.

In 1925 Nunzio Alioto an Italian immigrant set up a stall at #8 Fiisherman’s Wharf to sell lunchtime provisions to the Italian laborers. His business grew and by 1932 he had constructed the first building at the historic corner of Taylor and Jefferson, by combining the fish stand with a seafood bar specializing shrimp cocktails and steamed crab. Sadly, Nunzio passed away unexpectedly and “Nonna” Rose, his widow, and her three children began running the stall. When Rose took over, she became the first woman to work on the wharf. By 1938 she had installed a kitchen in the original structure and officially opened Alioto’s Restaurant.

It’s been said that Rose used to put a bib around her son before eating Cioppino and say, “If it doesn’t splatter on your shirt, you aren’t doing it right.”

I’ve always thought that the amount of stains on your shirt at the end of a meal indicates that you really enjoyed it. If you’re on Fisherman’s Wharf, its a tradition to eat at Alioto’s. But our recommendation is to head over to Sotto Mare in North Beach for the best San Francisco Cioppino or old school restaurant The Clam House which has been there since 1861.

Want to learn more about San Francisco Cioppino? Come join us on our North Beach Food Tour to hear about the Italian immigration into San Francisco and the neighborhood now known as “Little Italy”.