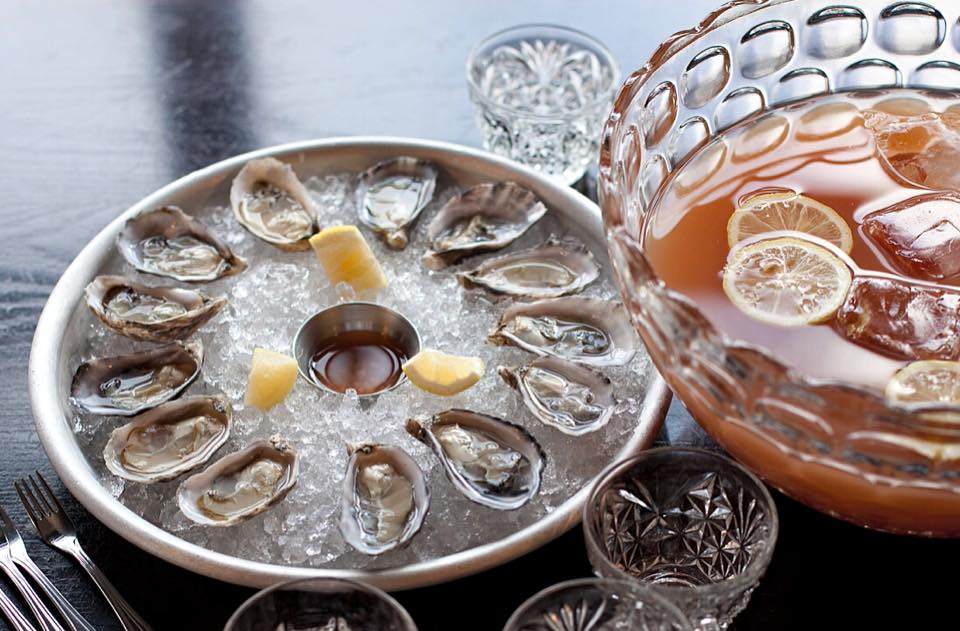 Although nobody knows who was the first person to crack open an oyster and slurp down the briny flesh inside, oysters have been consumed in the Bay Area for thousands of years. Mounds of shells appear in archeological record all over Northern California, including in San Francisco. What’s surprising is that the oysters that are consumed by locals and hungry tourists today are not native to the San Francisco Bay. Olympia oysters, or ostrea lurida as they are known scientifically, are the oysters that once flourished in the waters surrounding the city. The Olympia, a small oyster the size of 50-cent coin, blanketed the sub-tidal regions from Southern Alaska to Southern California for hundreds of years. During the Gold Rush, San Francisco’s population exploded and oysters were devoured by everyone.  Matthew Booker, author of Down by the Bay: San Francisco’s History Between the Tides, told the San Francsico Chronicle that oysters were so readily eaten by everyone that they were the Big Mac of their time. “The thing about oysters into the 1910s in San Francisco, they were not for foodies. They were the Big Mac of the 19th century. And they were a hell of a lot better for everybody, including the environment, than Big Macs. They were grown in the city. They were a creature that transformed waste into protein. They were delicious. An amazing species.” From the 1860s to 1911, San Franciscans were ravenous for oysters. They enjoyed them raw, baked, stewed, or in the Hangtown Fry, an omelet of oysters and bacon. According to the Chron, legend has it, the Hangtown Fry was created during the Gold Rush “when a condemned man ordered two of the most expensive items he could for his last meal: eggs and oysters.”

During this time period, oysters native to the East Coast were shipped out to San Francisco and were farmed alongside the Olympia Oysters. However, changing conditions in the bay and pollution caused the farms to be a short-lived endeavor. By 1911, the entire Olympia crop was depleted and the industry was basically dead. In the 1930s, what little farmers remained moved their crops to Tomales Bay. In 1931, the Pacific oyster, native to Japan, became available to California aquaculture. The Pacific is what is mainly farmed in the cold clean waters of Drakes and Tomales Bays today. Over the past ten years, the state has made a great effort to bring the extinct Olympia back to the waters surrounding the bay. In 2013, scientists and researchers from UC Davis and San Francisco State, made a major advancement when two million native oysters settled on man-made reefs in the Bay. The Olympia is not being restored for consumption purposes, but to better the natural ecosystem of the Bay, protect the shoreline, and minimize issues caused by sea-level rise.

Wondering where you can enjoy oysters fresh from the farms of Tomales? Here are the 5 Best Places to Eat Oysters in San Francisco:

What’s not to love about a bar that’s devoted to ham (hog) and oysters (rocks)?! This Mission District standby serves up sensational craft cocktails and an assortment of oysters on the half shell. East and West coast varietals of oysters are served raw with a housemade cocktail sauce and finger-licking-good herb butter. Hog & Rocks is the sort of casual all-day spot where you’ll stop by for a dozen oysters and a drink on a Sunday afternoon and before you know it, you’ve eaten half the menu and the bartender is saying it’s time for last call. Yes, I’m speaking from experience! Hog Island Oyster Company is a San Francisco institution. The 32-year old company has a sustainable farm in Tomales Bay and two oyster bars: one in Napa at the Oxbow Market and the second in San Francisco at the Ferry Building. Pull up a chair at the bar and order a glass of bubbly or a martini to pair with a plate of perfect raw oysters. Watch the shuckers work their magic — popping open the briny bivalve by the bushel in a matter of minutes. With gorgeous views of the Bay Bridge, Hog Island is almost always packed and rightfully so: the oysters are the best in town. There’s also seasonal cocktails, an amazing clam chowder, and quite possibly the best grilled cheese sandwich in the city on the menu. All of Hog Island’s oysters come with their signature Hog Wash, a mignonette that is made with rice vinegar, cilantro, and jalapeño. If you’re after stunning views and elegant atmosphere, Waterbar on the Embarcadero is the ideal spot to enjoy a few shoals. With a name like Waterbar you can only guess what their specialty is: seafood. Chef Parke Ulrich and restauranteur Pat Kuleto joined forces to open this swanky all-day shellfish haven just under the Bay Bridge. Every day from 11:30 am to 5:30 pm, oyster lovers can enjoy a daily changing varietal of oyster for just $1.05 — which is a spectacular deal. There’s over 15 different kinds of oysters on Waterbar’s menu and when served raw, they come with a chili and Meyer lemon mignonette. Waterbar is so well known for their oysters that they shuck and serve a whopping 2000 oysters per day! Looking for a spot that locals truly love? Head to Bar Crudo on Divisadero Street. This hip and casual seafood restaurant serves up the city’s best chowder and has a wildly popular $1 happy hour menu from 5 – 6:30 pm daily. The atmosphere is moody, but inviting and a long bar lines one side of the space. The modern raw bar has been serving up oysters (and crudo, grilled octopus, whole branzino, and a slew of other delectable fish preparations) to shellfish loving San Franciscans since 2005. Local sustainable fisheries are supported and there’s also an interesting wine list of bottles that pair particularly well with shellfish. Although one can never get enough raw oysters, when you’re in the mood for baked oysters, there’s only one place to go: Boxing Room in Hayes Valley. They offer three different kinds of delicious baked oysters. Classic Rockefeller with spinach, cream, and absinthe; Charbroiled with garlic-herb butter and breadcrumbs, and Simoneaux (the chef’s last name) with tasso ham, red pepper, and parmesan cheese. Monday through Friday, from 3 – 6 pm, oysters are half off. If you’re feeling daring, order an oyster shooter. It’s a shot with a raw oyster, the housemade bloody Mary, and green chili vodka. Cheers!

I should also mention Swan’s Oyster Depot on Polk Street. This establishment has been serving fresh-shucked oysters since 1912 and the barstools that dot the counter-only seating are original. Swan has a stellar selection of oysters and informative friendly staff, however , it’s not one of my top five spots for oysters because there is always a long line running out the door. If you do want to try the oysters at the famed Swan’s Oyster Depot, you will have to wait in line.

Want to visit one of the Best Places to Eat Oysters in San Francisco? Join us on our Tuesday evening or Saturday afternoon Mission District Food Tour! Come Eat with Us!