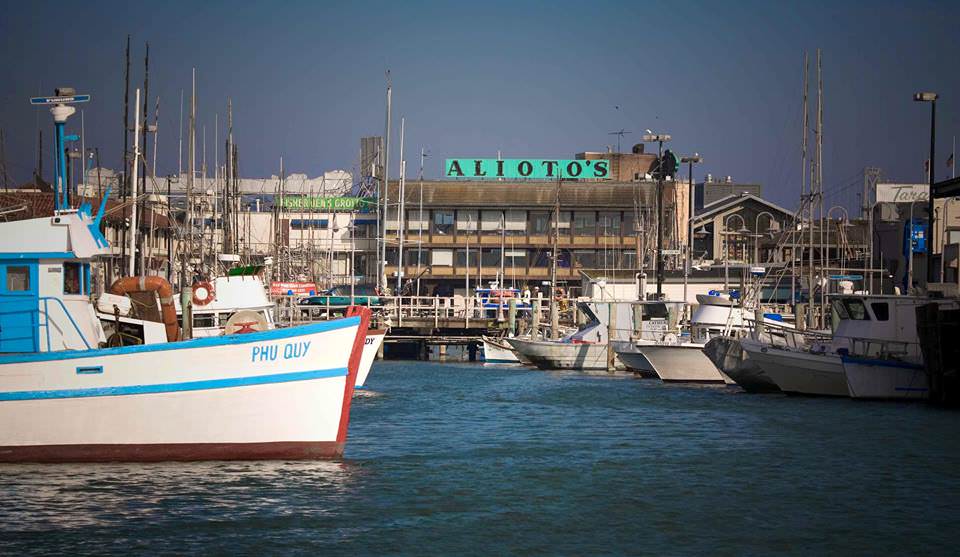 Today, Fisherman’s Wharf is one of San Francisco’s most popular tourist attractions. However, the wharf has always been a huge landmark in the history of the city. First it was a point of entrance for immigrants and then it was a fish market where Chinese and Italian fisherman would peddle the day’s catch to locals and restauranteurs. In the 50s and 60s, with its lineup of glamorous seafood restaurants and stunning views of the bay and Golden Gate Bridge, the wharf was a place where San Franciscans would take their families out for celebratory meals. Overtime, Fisherman’s Wharf has morphed into what it is now: a melting pot of layers of history with piers that commemorate the past, attractions that highlight the area, and restaurants that serve freshly-caught fish delivered from fourth-generation fisherman. One such Fishermans Wharf restaurant is Alioto’s, which dates back to 1925. According to the San Francisco Chronicle, Alioto’s is a “legendary, massive Fisherman’s Wharf stalwart — and its family — is as much a part of San Francisco as the Wharf itself.” Alioto’s started as a fish stand, number eight, at Fisherman’s Wharf. For Sicilian immigrant Nunzio Alioto, Sr. the fishery business boomed and so in 1932, he built the very first building on Fisherman’s Wharf. It was a counter that sold fresh crab and shrimp cocktail. Just a year later, Alioto died and his widow, Rose, and his three children took over the business. In 1938, the Alioto family opened the official restaurant with a full kitchen at stall #8. Legend has it that Rose, the wharf’s first female entrepreneur, created cioppino, SF’s beloved tomato-based fish stew, and originally served it to Italian day laborers. Alioto’s did not thrive as a restaurant until 1939, when the World’s Fair declared Fisherman’s Wharf a tourist attraction for the first time. In 1950, Rose expanded the restaurant by purchasing the stall next door to Alioto’s. Seven years later, she added a second story to the restaurant which would make it the tallest building on the wharf. However, later that year in 1957, a fire ravaged the building and it had to be completely rebuilt. For the next thirty years or so, Alioto’s chugged along as one of the city’s most well-known and popular restaurants. In 1995, the King and Queen of Norway dined there and in 1998, the Aliotos redesigned the interior to make it feel more like a museum — lining the entry walls with photos and newspaper clippings from its history.

Today, the classic seafood restaurant is still run by members of the Alioto family. The website says that little has changed since 1925: “fish is still bought fresh daily including sea bass, sand dabs, sole, swordfish, tuna, scallops, salmon and Dungeness crab, all locally caught, when possible.” The menu is Italian and seafood heavy with everything from Sicilian-style calamari in a spicy tomato sauce to risotto Nonna Rose with bay shrimp, crab legs, mushrooms, and peas. It is open seven days a week from 11 am to 11 pm. To learn more about Fisherman’s Wharf, download our walking tour of the historic region now.