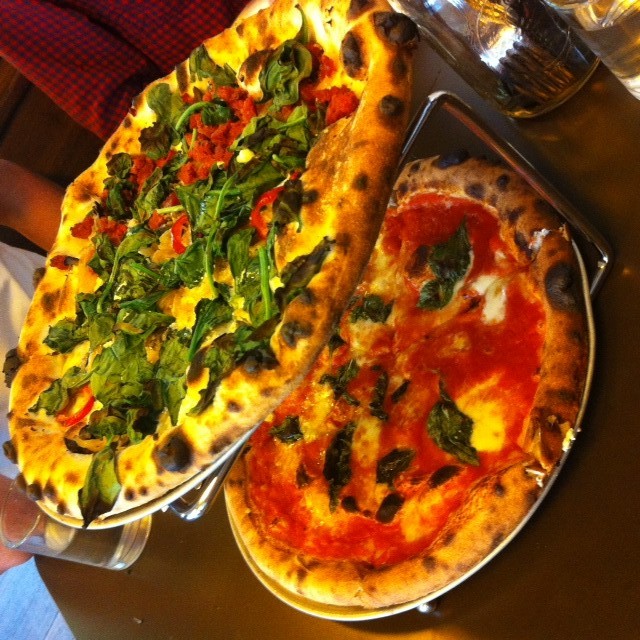 Garage Bar in Louisville, Kentucky is where chef Michael Paley of Proof on Main fame and a favorite of the James Beard Foundation lends his bold cooking style to pizza.

After realizing that I had eaten at 10 of the 30 best pizza spots in the country according to Food and Wine magazine, the hunt continued as I crossed the country to move to Nashville, TN. To say I was concerned about fulfilling my perfectly blistered crust needs is an understatement. The Place: In 2011, Paley opened Garage Bar, a casual neighborhood eatery housed in a former auto service station and historic saloon in downtown Louisville. Just one year later, it was named one of the “Best New Pizza Places in the South” by Food & Wine magazine. I loved the atmosphere, open and light, ping pong tables outside, a statue of a car wreck and t-shirts sold in oil cans. The service was impeccable, southern charm meets genuine food lover who loves their job.

I got a really nice, genuine smile from the pizzaiolo working the oven built by hand in Naples, Italy by Stefano Ferrara. Ferrara’s grandfather started the business during the 1920s and Ferrara ovens are now considered one of the most reliable, authentic Neapolitan brick ovens in the world. The menu emphasizes seasonal, local ingredients from regional farmers and producers. Having just left San Francisco, this was a welcome sight. I just didn’t know what to expect other than fried chicken, whiskey and bourbon when I arrived in Kentucky. ocktail: I just had to order a cocktail, my first craft cocktail since I landed in the South and it was perfect. The “House Tonic” a staple at Proof on Main, Paley’s previous restaurant featuring gin, was earthy and light. The only problem was that I only had one! The Dishes: The Caesar salad with fried kale and white anchovy knocked my flip flops off. The texture of the country kale was such a nice surprise, so I see why Chef Paley gets so many props for being creative and bold.

Garage Bar’s pies are naturally leavened, hand kneaded and crafted in small batches. Pizzas are hand stretched and cooked in the oven powered by kiln dried birch wood that has seven percent moisture. “This allows for optimal conditions in the oven. Quick cooking at high (850 degrees Fahrenheit) heat produces a thin, chewy crust that is lightly blistered and crisp on the outside. “ The pizzas we re not only beautiful, the ingredients were beyond fresh and light, especially the house made pepperoni!

We ordered the Margherita and the House Made Pepperoni with Spinach, caramelized onion, pickled fresnos, olives & goat cheese. Both the vegetarians and carnivores alike delighted in the taste, texture and experience enjoyed at Garage Bar. I am so glad it is only 3 hours away!