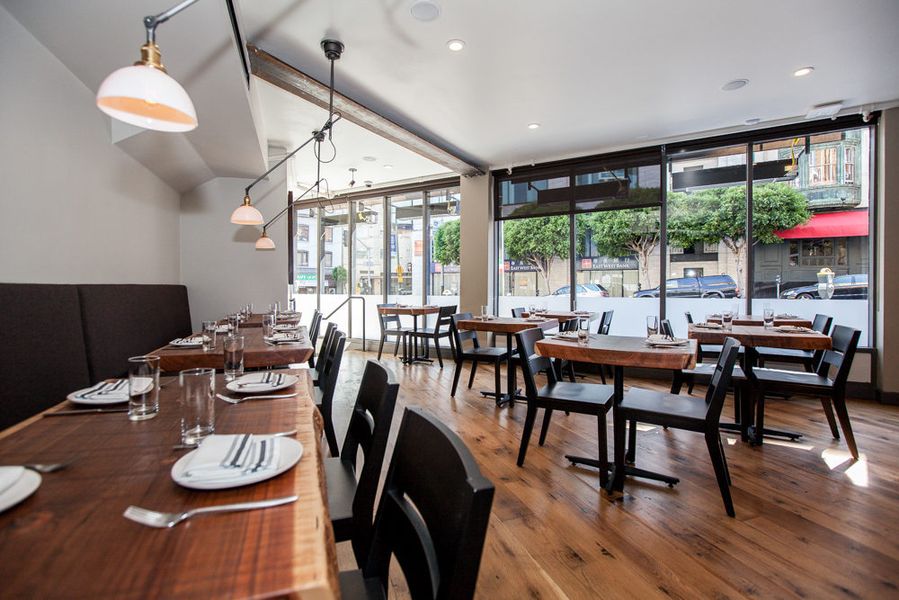 The Place: Doc Ricketts restaurant sits at the edge of the Jackson square historic district and evokes the nostalgic Barbary Coast era, while still evoking a sleek, modern flare.  Paintings of jellyfish, anatomical diagrams, and a portrait of the Doc himself adorn the walls of the newly refurbished historic building (1911). The Dishes:  It’s difficult to choose among the tantalizing appetizers, but the Wild Mushroom Panzanella is a hearty stand-out.  The bacon and shallot vinaigrette balances the earthiness of the mushrooms with the light refreshment of the tossed greens.  A lighter complement to the Panzanella is the Crudo appetizer, lightly dressed with Asian flavors of shiso, pomegranate, and cucumber.  These two would surely have sufficed, but I couldn’t pass up the Buratta appetizer with persimmon, prosciutto, and levain, given my ravenous love of persimmons!  The trio of appetizer were the perfect opening act for the Roasted Chicken entree.  Brazed for over 2 days, this chicken is juicy and delectable, with a mildly bitter broccoli rabe and fingerlings to back it up.   The house-made chicken liver mousse was the cherry on top.

Insider Secrets:  Hidden downstairs below Doc Ricketts Restaurant is Doc’s Lab – a performance venue (and bar, small plates) for music, comedy, and literary events.  The basement venue was formerly the legendary The Purple Onion, which hosted and launched such celebrities as Phyllis Diler, Robin Williams, Lenny Bruce, and Richard Pryor.