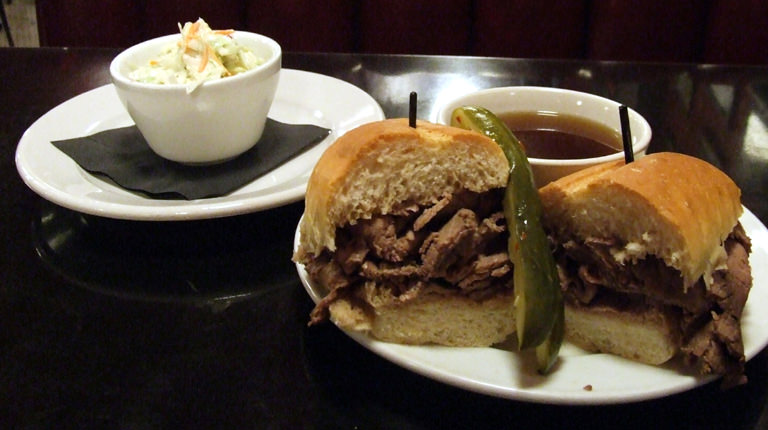 The invention of the French dip sandwich is one of L.A.’s most hotly contested culinary legends. Some people say it was invented at Philippe’s, the cheap Chinatown restaurant especially popular among city workers and Dodgers fans. Others maintain the honor goes to Cole’s, the former check-cashing/electric utility/train station that now draw a trendy crowd.

Both of those spots have their own invention story (Philippe’s says theirs took shape in 1918, to zhuzh up some stale rolls, while Cole’s says their au jus side was first provided in 1908 to a customer with bad teeth), but more importantly, they’ve inspired other Los Angeles restaurants to create their own versions of meat piled high on bread, served with a side of … well, meat, in broth form. This was L.A.’s oldest still-operating restaurant for almost 100 years, until it closed in 2007 for a total overhaul under the direction of Cedd Moses, a man who really led the charge in rehabilitating downtown. The revamped restaurant is retro perfection, with pressed tin ceilings and dark wood tables. There’s a bar in the front, and if you know where to look, an excellent bar called Varnish through a door in the back. The food menu is limited, but that’s fine: you’re here for the French dip, available in a variety of different meat options. http://213nightlife.com/colesfrenchdip, 118 E. 6th St., Los Angeles, 213-622-4090 Though this Philippe’s is not in its original location, it still has legions of loyalists that come here regularly to enjoy down-home (some would call rude) service and unexplainably excellent coffee, in addition to the French dip. Oh, and the pickled eggs, which are on the counter next to the registers. Yes, you order at the counter and eat at communal tables, and people love it. Try the lamb French dip with blue cheese — might sound crazy, but those in the know swear by it. http://www.philippes.com/, 1001 N. Alameda St., Los Angeles, 213-628-3781

One of L.A.’s classic mid-century steakhouses, the Dal Rae is one of Southern California’s most glorious white tablecloth establishments. (Of course, being that it’s Southern California, the signage is all in neon.) The restaurant even makes their salads tableside, a great tradition that should be revived everywhere. The menu here is huge, and in addition to half-pound lobsters and 14-ounce filet mignon, there are some surprises, like tuna melts. And French dip. Made with prime rib, sure, and huge, which is appropriate, given that it comes in at $22. It’s a near guarantee that if you like meat, you’ll like this — just consider tucking a napkin into your shirt. http://www.dalrae.com/, 9023 E. Washington Blvd., Pico Rivera, 562-949-2444 While most of L.A.’s best food can be found in strip malls, it’s rare that indoor malls here will have anything more exciting than a P.F. Chang’s. One exception is Westside Tavern, which offers truly good food in a setting upscale enough that very wealthy businesspeople who work in the neighboring Century City high rises will come here for business dinners. The French dip here comes only in lamb form (probably a nod to Philippe’s best version), and it is excellent. www.westsidetavernla.com, Westside Pavilion Mall, 10850 Pico Blvd., Los Angeles, 310-470-1539 Most western dishes can be improved by adding eastern flavor profiles, and the Vietnamese French dip made at East Borough is good evidence of that. They essentially have deconstructed pho, placing the onions, sprouts, herbs, chilis, hoisin, and most integrally, beef, on a baguette, with a cup of the beef broth — which is essentially what au jus is — on the side. This is a very savvy homage to the best of L.A.’s food scene, packaged in a very sleek, loud, bustling little jewelry box of a restaurant. With a full bar. http://culvercity.east-borough.com/, 9810 Washington Blvd., Culver City, 310-596-8266

Want to taste the French Dip Sandwich from early inventor Cole’s? Come join us on our Downtown Los Angeles Food Tour. Come Eat with Us!